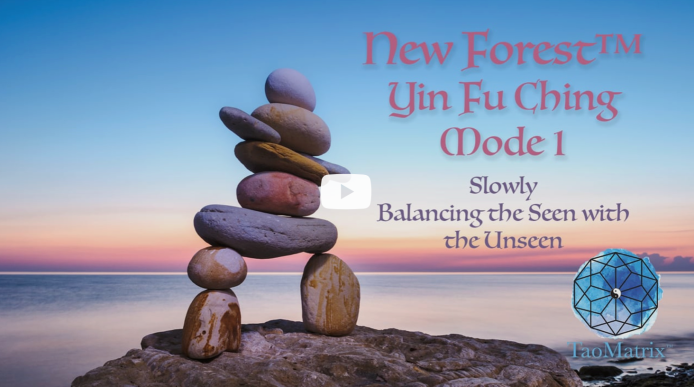 This is a new series of classes that I am working on. It is about Modes of playing Yin Fu Ching to help deepen the experience of Harmonizing the Seen with the Unseen.

If you have been watching the New Forest Qigong videos, Yin fu Ching (Harmonizing the Seen with the Unseen) was one of the forms that I introduced in around class 5. We played it as a stand-alone exercise as well as a diagnostic. So we can play Yin Fu Ching and take a Qi-based picture of one of the patterns of Qi moving around our systems.
Then we have a choice to be able to “mine the magic” to accentuate the number with New Forest™ Qigong, or We can “Fill the Hole” or play with the Qi shape that feels the worse or that you have the least connection. Then play the New Forest™ Qigong to help establish a better connection and enhance the shape of Qi associated with that number. Remember the 1-10 Qigong are movements, combined with breath and imagery, all of which take established shapes of healthy Qi within the body and encourage the Qi in the body to move in a way that promotes health. The best thing of all is that you feel it. By playing Qigong, you will notice a lightness of being, that relaxation is washing over you, that your thinking has begun to clear.

Systems of belief are amazing things. Scientific studies are rife with examples in which people’s belief systems blind them to answers that had been staring them in the face for hundreds of years. In this case, I am talking about Qi and modern science. Practitioners of this stuff describe Qi not by what it is but by how it behaves. What Qi is made of, made no difference to cultivators. It is Life force! WHAT, Qi is, Is the booby prize. THAT, it moves in predictable ways, is what cultivators were concerned with. Cultivators have been watching the effects of Qi moving within nature as well as within bodies for many millennia. All you have to do is enter a belief system where it works for you, and your body will begin to cooperate.

Modes in Yin Fu Ching dive into deeper shapes of qi moving within the bodymind that you can become aware of by playing Yin Fu Ching in certain ways.

Mode 1 is moving very slowly. By moving slowly, evenly, you gain greater access to the slow Qi that moves within nature and yourself. This is profoundly relaxing. Since Qi doesn’t like to move through tension, it moves around it, that creates pockets where Qi doesn’t move evenly. By moving slowly, you not only can find and isolate where your tension resides it also gives you a way to begin to relax those areas that are holding tension. When the Qi begins to move freely throughout the body health begins to take root, and your body begins to move efficiently. The amount of Qi that moves through your bodymind increases as well. The goal with Mode 1 is a free and unobstructed flow of Qi within the bodymind.

What is Transformative Movement?

Transformative movement has been utilized in every continent and every region of the world.  It seems clear to me that early on in human development, we realized that in blending imagination, movement, and breath, we could enhance our connection to ourselves and our environment.
What is Transformative Movement?

Playing this set will put you in harmony with the Wood Element. When the Qi of your body-mind flows with the Wood element the Qi flows more smoothly from your environment into you and back into the environment again.    If you want to be in balance energetically with the season that begins March 21 through May 31, this is an excellent set to play.
New Forest® Wood Qigong

Playing five elemental Metal qigong with the season is a great way to have your system sing in harmony with the time of the year. Increasing a clear state of mind, resiliency, and a sense of well being.
New Forest™ 5 Element Metal Qigong by Sifu John A. Fey

Motion with Breath, Balancing the Seen with the Unseen. As Sifu John Fey designed the modes, Mode 3 is about authenticity.
New Forest™ Yin Fu Ching Mode 3 by Sifu John a Fey

Playing 5 elemental qigong with the season is a great way to have your system sing in harmony with the time of the year. Increasing a clear state of mind, resiliency, and a sense of well being.
New Forest™ 5 Element Earth Qigong Set by Sifu John A. Fey.

This set helps form a specific frequency if Qi in the bodymind that matches the time of year and the Shape of Qi that occurs when the Water element is flowing smoothly in the bodymind.
New Forest™ 5 Element Water Qigong Set by Sifu John A. Fey
Loading Comments...
Comment
×
%d bloggers like this: